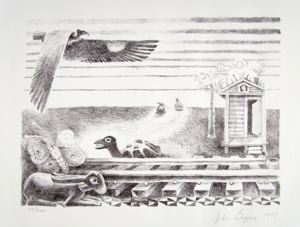 Daufuskie Race, The First Race Between the Turtle and the Hare


Object Type: PRINTS
Creation Place: North America
Medium and Support: Lithograph
Credit Line: Purchased with funds provided by Robert and Susan Gerhardt in honor of their grandchildren
Accession Number: 15-G-3691
Born in Gastonia, NC, Biggers studied at Pennsylvania State University where he earned a B.A. and M.A. in art education 1948 and a Ph.D. in education 1954. Biggers is best known for his public art murals, although he is also well respected for his paintings, drawings, and prints. His influences, including African art and Southern African American culture, are clearly visible in his art.

In Daufuskie Race, The First Race Between the Turtle and the Hare, Biggers depicts a classic scene from the Aesop fable of the turtle and hare. The hare can be seen in the bottom right corner, and the turtle is in the center behind the railroad tracks. Biggersâ works often contained shotgun houses, churches, or railroads, which were symbolic of black culture, spiritual rebirth, and travel.