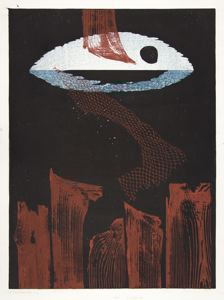 
Object Type: PRINTS
Medium and Support: Woodcut in 4 colors
Accession Number: 66-G-52
The ocean, with its limitless breadth and scope
Embraces all deep in its heart;
The anger, too, of the bitter and tempestuous night.
Peace descends silently in the distant horizon.
I love the Ocean.
-Reika Iwami

Iwami Reika was a Tokyo-based modern and contemporary abstract artist whose work was a major part of the Sosaku Hanga (Creative Print movement). After studying oil painting, doll making, and printmaking in Tokyo, she decided to focus on printmaking in 1954, working with three of the most important modern printmakers in Japan. Iwami would later join the Japan Print Association in 1955 and co-found the Womenâs Print Association, Joryu Hanga Kyokai, in 1957. Her work is located in the Library of Congress, the Museum of Modern Art in New York City, the British Museum, and the Art Institute of Chicago.

Iwami rarely relied on bright colors, preferring to use a solid black background in order to accentuate the texture on the surface of her woodblock prints. To accomplish this, she would press objects such as wood against the paper to capture elemental qualities such as the surface grain. In the absence of colors, the audience can appreciate how the textured forms and metallic silver sprinkles stand out against the black setting. Sea, Evening Calm is an early work of Iwami, done before she established her signature style of gold foil and embossing techniques. Here Iwami incorporates a method called mica originating from the late Japanese Edo period to create a shimmering surface in the print.


- 20th Century Japanese Prints, Curated by Carmen Vendelin, La Salle University Art Museum, June 23-August 31, 2006.
Keywords Click a term to view the records with the same keyword
This object has the following keywords:
Japanese
Dimensions
Portfolio List Click a portfolio name to view all the objects in that portfolio
This object is a member of the following portfolios: