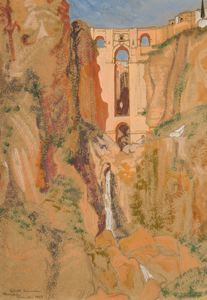 The Bridge of Ronda (Spain)

Born in Ohio, Emerson trained at the Art Institute of Chicago before moving to Philadelphia to study at PAFA under Cecilia Beaux and Violet Oakley. Emerson assisted Oakley in her studio between 1917 and 1930, developing a partnership which lasted until Oakleyâs death in 1961. Emerson taught art at the Agnes Irwin School from 1916 to 1927; at the Philadelphia College of Art from 1929 to 1936; and at Chestnut Hill College 1948 to 1956. She also worked as a curator and director of the Woodmere Art Museum from the early 1940s through 1978. She traveled widely in Europe, including Spain, where she was inspired to paint the 18th century Puente Nuevo (New Bridge) in the town of Ronda.

-Painting in Water-color: Selections from the Permanent Collection, Curated by Caroline Wistar, La Salle University Art Museum, November 5, 1983 â February 1, 1984.
Portfolio List Click a portfolio name to view all the objects in that portfolio
This object is a member of the following portfolios: