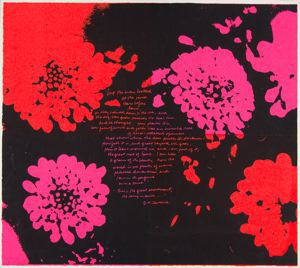 "but the man looked at the vivid stars before dawn, as they rained down to the sea, and the dog-star green toward's the sea's rim. And he thought: "How plastic is it, how full of curves and folds like an invisible rose of dark-petalled openness that shows where the dew touches its darkeness! How full it is, and great beyond all gods. How it leans around me, and I am part of it, the great rose of space. I am like a grain of its beauty. Now the world is one flower of many petalled darknessess, and I am in its perfume as in a touch." " This is the great atonement, to be in touch..."
- D. H . Lawrence, from The Man Who Died
Current Location: In Storage