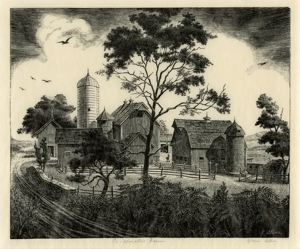 In a long career spanning over 60 years, Albee was a proÂ­lific printmaker and wood engraver, producing designs for over 250 editions of fine art prints. Born in Rhode Island, Albee studied at the Rhode Island School of DeÂ­sign from 1910-1912, then in 1913 she married muralÂ­ist Percy Albee, with whom she had five sons. In 1928 she moved with her family to Paris where she associated with other expatriate artists and developed an interest in urban and rural landscapes; then in 1933 she returned to the United States and lived in New York City. In 1937, she moved to Doylestown, PA, where she became absorbed in the rural subject matter for which she is best known.

Co-operative Farm illustrates Albeeâs precise woodcarvÂ­ing skills and her love for rural landscapes. The viewer is drawn into the scene by the road in the foreground, which curves upward and leads into the eye back toÂ­wards the farm buildings and silos. Sprawling shrubs and a tall central tree add foreground interest, and viewers are offered a tantalizing glimpse between the farm buildÂ­ings into an area with a single laborer carrying a load. Albeeâs use of white lines (the un-inked grooves of the wood block) to highlight the edges of foliage and farm buildings give the appearance of luminosity, suggesting a scene of abundant sunshine and prosperity.