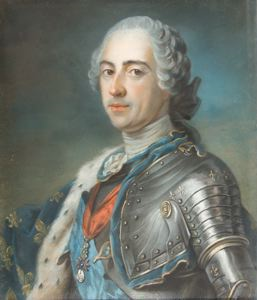 
Object Type: DRAWINGS
Creation Place: Europe, France
Medium and Support: Pastel on paper
Accession Number: 75-D-62
This work is attributed to the circle of Maurice-Quentin de la Tour, one of the most fashionable and popular Parisian portraitists of the 18th century. He usually executed his works in pastel on paper, a new medium which was brought to France from Italy around 1720 by Rosalba Carriera. His style was a reaction against the stately portraiture of past generations and the mythological portraits of his contemporaries. He developed a realistic, sober style of portraiture remarkable for suggesting of the temperament and psychology of his subjects through their facial expressions. La Tour achieved significant success with his portraits, earning him commissions from the French royal family, court, and rich bourgeoisie in addition to literary, artistic, and theatrical circles.

Conservation
- 2009 - In need of conservation - Included in IMLS survey
For more information: http://artmuseum.lasalle.edu/exhibits/show/conservation-surveys/drawings/louis-xv
Keywords Click a term to view the records with the same keyword
This object has the following keywords:
Portrait
Portfolio List Click a portfolio name to view all the objects in that portfolio
This object is a member of the following portfolios:

Your current search criteria is: Portfolio is "Portraits - Other" and [Objects]Country is "France".