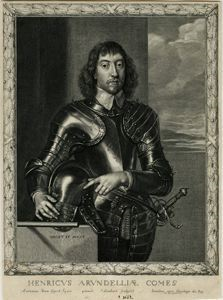 Van Dyck had a successful career in England as well as in his native Flanders, and he was known for his stunning life-size portrait paintings.

He produced many portraits of the Arundel family, whose figurehead, Sir Thomas Howard, was one of the artistâs great patrons. This print after a drawing by Van Dyck is a three-quarter length portrait of Henry FredÂ­erick Howard, the 22nd Earl of Arundel, the son of Sir Thomas. He wears armor reminiscent of his fatherâs, as captured in a portrait by Van Dyckâs mentor Peter Paul Rubens. His helmet sits on a column to his right. It bears an inscription that reads âDroit et Avantâ(âRight and Frontâ), surely a reference to his readiness for battle. Behind him, through an open window, are dark and bilÂ­lowing clouds above the ocean coast. This may refer to the Arundelâs land in West Sussex along the southeast coast of England.

This print is one of over 100 from an edition of IconoÂ­graphia. This was a series of portraits that, at Van Dyckâs instigation, was first published between 1626 and 1635. It includes engravings and etchings of famous men, and some women, who achieved greatness as princes and nobles, statesmen and military leaders, or scholars and artists. Although some 20 prints were etched by Van Dyck in his signature sketchy style, the majority, like this print by Pierre Lombart, were engraved in a more traditional way.

Your current search criteria is: Portfolio is "Portraits - Other" and [Objects]Country is "France".