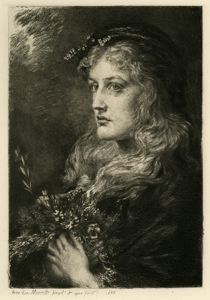 This portrait was executed after an oil painting exhibited at the Royal Academy of London in 1880. Merritt studied inmates at a British a mental facility as well, to try to capture what she viewed as the essence of Shakespeare's Ophelia as performed by the great British actress Ellen Terry, and one-time wife of George Frederick Watts.
Current Location: In Storage

Your current search criteria is: Portfolio is "Portraits - Other" and [Objects]Display Creator is "Anna Lea Merritt".