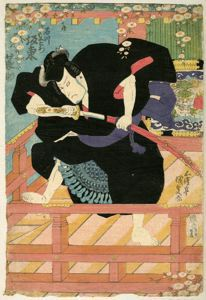 
Object Type: PRINTS
Creation Place: Asia, Japan
Medium and Support: Woodblock print, ink and colors on paper
Credit Line: Gift of Benjamin D. Bernstein
Accession Number: 79-G-1009
Ishikawa Goemon was a robber of the Azuchi-Momoyama period. He tried to kill Toyotomi Hideyoshi but failed and was sentenced to death by boiling. He was executed in front of the main gate of the Nanzenji Temple in KyÅto. His young son was also put in the cauldron but it was said that Goemon held his kid above the boiling water up to his death. The life of this larger-than-life robber was dramatized in both Kabuki and the puppet theater. The most famous drama with Ishikawa Goemon is "Sanmon Gosan no Kiri", which was staged for the first time in the 4th lunar month of 1778.

Keywords Click a term to view the records with the same keyword
This object has the following keywords:
Portrait, Ukiyo-e
Dimensions
Portfolio List Click a portfolio name to view all the objects in that portfolio
This object is a member of the following portfolios:

Your current search criteria is: Portfolio is "Portraits - Other" and [Objects]Display Creator is "Utagawa Kunisada I (Toyokuni III)".