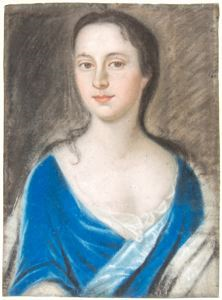 Portrait of a Young Woman

Johnston was both the earliest known female artist and the first pastelist in the English colonies of North America. Probably born near Rennes, France, she lived in England and Ireland before moving to Charleston, South Carolina, with her second husband who was a commissary of the Church of England. Johnston supplemented her husbandâs limited income by selling modestly-priced portraits in pastel. Only about 40 portraits by Johnston survive, making this Portrait of a Young Woman a rare example.

A pastel is a crayon made of loosely-bound powdered pigment bound with a weak adhesive, and part of the pastel portraitâs appeal is its fragility. The French encyclopedist Denis Diderot described the medium as a âprecious powder that will fly from its support, half of it scattered in the air and half clinging to Saturnâs long feathers.â Pastel portraits of societyâs elites were in high demand in 18th-century France and England, as well as in their colonies. Because of the lack of varnish on their surface, the colors in pastel drawings remain brilliant and fresh, and would have sparkled in 18th-century interiors lit by candlelight and filled with mirrors and gilt furnishings.

Conservation
- 2015-2016 - Conserved with Support from the Stockman Family Foundation
For more information: http://artmuseum.lasalle.edu/exhibits/show/conservation-treatments/drawings---watercolors/portrait-of-a-young-woman

- 2009 - In need of conservation - Included in IMLS survey
For more information: http://artmuseum.lasalle.edu/exhibits/show/conservation-surveys/drawings/portrait-of-a-young-woman
Exhibitions


- American Originals: Works on Paper from the Permanent Collection, Curated by Dr. Klare Scarborough and La Salle University Associate Professor of Art History Dr. Catherine Holochwost, December 16, 2015 through March 4, 2016.
Keywords Click a term to view the records with the same keyword
This object has the following keywords:
Portrait
Dimensions
Portfolio List Click a portfolio name to view all the objects in that portfolio
This object is a member of the following portfolios:

Your current search criteria is: Portfolio is "Portraits - Other" and [Objects]Object Type is "DRAWINGS".