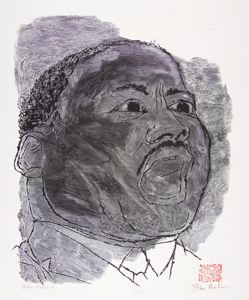 
Description from the International Graphic Arts Society bulletin, series no. 69, May 1966:

"IGAS feels privileged in releasing to its members a wood-engraving done cooperatively by Ben Shahn and Stefan Martin. This is a venture rare in the history of American graphics. Wood-engravings are cut with burins on the highly polished end-grain of a very dense and refractory wood - in this case, South American boxwood. Shahn has provided the image - Martin has engraved the block and supervised the printing. Both artists have signed the prints.

Until the invention of photo-mechanical engraving, all illustrations in newspapers and books were created and printed in this way. In recent times this practice has been almost wholly abandoned. Apart from its artistic value, this print is interesting as a technical experiment and as the revival of an old tradition.

Foreseeing the great demand for this print, the edition is drawn in 300. It is available only to members who joined prior to April 1, 1966."


The original drawing by Shahn was commissioned by Time magazine, and appeared on the cover of the March 19, 1965 edition.
Current Location: In Storage


Keywords Click a term to view the records with the same keyword
This object has the following keywords:
Portrait
Dimensions
Portfolio List Click a portfolio name to view all the objects in that portfolio
This object is a member of the following portfolios:

Your current search criteria is: Portfolio is "Portraits - Other" and [Objects]Object Type is "PRINTS".