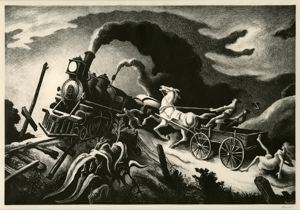 Thomas Hart Benton was born in Missouri, studied in Chicago and Paris, and began his artistic career in New York City, where he lived and worked for over twenty years, though he is most famously associated with the American Midwest. In 1935 he returned to Missouri and accepted a teaching position at the Kansas City Art InÂ­stitute. Benton is considered a pioneer in the RegionalÂ­ist art movement. He illustrated common scenes of rural American life, promoting a sense of nostalgic nationalÂ­ism and familiar appeal to middle class Americans in the 1930s and 1940s.

Southern Railroadâs mail train no. 97 derailed while en route from Monroe, VA, to Spencer, NC, on SeptemÂ­ber 27, 1903. The event inspired balladeers and counÂ­try music singers. âEverybody knows the song,â Benton wrote, âcowboys sing it, people who live in the southern Appalachians sing it, as well as those who live in the Ozarks and out on the prairie farms. It has even found its way to the fishing coasts of New England.â Benton iniÂ­tially drew the subject in 1926-27 and created the lithoÂ­graph in 1944. The artist imagines a scene in which the speeding locomotive nearly collides with horse and cart, literally contrasting the dark steam and steel of progÂ­ress against the pure white working animal and simple spokes of the cartâs wheels.