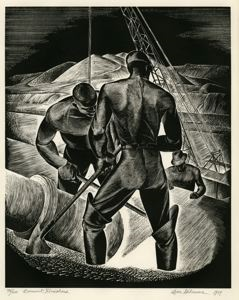 Gilmour immigrated to the United States in 1916 at the age of nine. Born in Riga, Russia, Gilmour pursued artistic training during his brief stay in Boston at the School of Practical Art. To support himself, he worked in a variety of capacities, including as a truck driver, construction worker and field hand. Upon moving to the west coast, Gilmour studied at the Otis Art Institute under Paul Landacre, who is often credited with elevatÂ­ing wood engraving to an art form. As a result of his own experience with menial labor, Gilmour produced numerous prints glorifying the strength and resilience of workers. During this period of rampant unemployment in the 1930s, images of productivity were intended to be received as symbols of optimism. Moreover, under the WPA/FAP, artists themselves were considered skilled labor, therefore allying them with the monumental veÂ­hicles of industry pictured here.