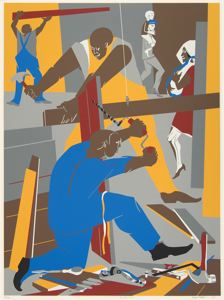 
Object Type: PRINTS
Creation Place: North America
Medium and Support: Color Serigraph
Credit Line: Gift of Edward I. Bernstein
Accession Number: 79-G-1065
Lawrence was one of the most successful and influential African American artists of the 20th century. Born in Atlantic City, NJ, he grew up in the Philadelphia area then moved to New York City as a teenager. He dropped out of high school at age 16 but took classes at the Harlem Art Workshop with Charles Alston. In 1941, when he was 23 years old, he completed his best known works, the Migration Series, a sequence of 60 paintings about the Great Migration of American Americans from rural South to the urban North, which were purchased by the Museum of Modern Art in New York and the Phillips Collection in Washington, D.C.

Many of Lawrenceâs artworks illustrate stories from African American history, as well as scenes from contemporary black culture. In the late 1940s, he began to explore the theme of Builders, which became the focus of another well-known series. He wrote, "The Builders came from my own observations of the human condition. If you look at a work closely, you see that it incorporates things other than the builders, like a street scene, or a family." With Builders No. 3, Lawrence depicts three male carpenters handling various construction tools. He employs a dynamic Modernist style, with flat planes of bold colors, formal rhythms, and an up-tilted picture plane. Beyond the workmen, the presence of pedestrians indicates the urban setting and suggests the vibrancy of city life.
Current Location: In Storage