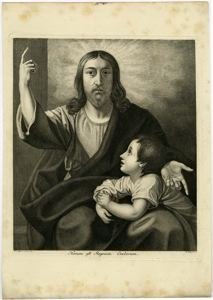 
Object Type: PRINTS
Creation Place: North America
Medium and Support: Engraving
Accession Number: 05-G-3313(4)
Born in Springfield, Pennsylvania, of Quaker heritage, Benjamin West was the first American artist to acquire an international reputation. He emigrated to England in 1763, and soon became one of the foremost painters of historical and religious drama. He was court painter to King George III and a founding member of the Royal Academy, London, and later its President.

This engraving was commissioned by Swiss physiognomist, J.C. Lavater, after a painting gifted to him by West. The engraving appeared in his book, Physiognomische Fragmente (Vol. IV, 1775-79). The subject is from Matthew (19:14): "Suffer the little children, and forbid them not, to come unto me: for of such is the kingdom of Heaven."