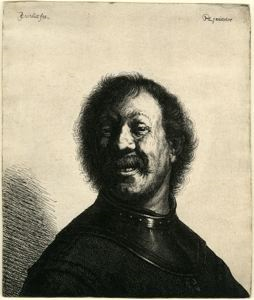 Laughing Man in a Gorget

The man wears a gorget, a metal breastplate with a colÂ­lar that functions as armor. Van Vlietâs portrayal is much like that of the laughing cavalier, or a mounted soldier of a high rank. The cavalier was popular subject in the 17th century. At the time, there was concern about reÂ­turning or off-duty soldiers in civil society. In paintings and prints of the day, the soldier is shown as possessing a devil-may-care attitude. He drinks too much, smokes too much, loses at card games, cheats at card games, seÂ­duces local girls, and visits brothels Van Vlietâs soldier, caught in a spontaneous mid-laugh, conveys something of this attitude. The manic expression might also elicit some anxiety from the 17th-century viewer. The mysteÂ­rious shadow serves to deepen that anxiety.

The print is one of a series of âtroniesâ popular in the Baroque period. Van Vliet used a now-lost painted self-portrait of Rembrandt in costume as a model for the head. After this figure was paired with another of Van Vlietâs heads, that of a grieving man, the two earned the title of the Laughing Democritus and the Weeping HerÂ­aclitus, two ancient Greek philosophers.

Your current search criteria is: Keyword is "J" and [Objects]Display Creator is "Jan Georg van Vliet".