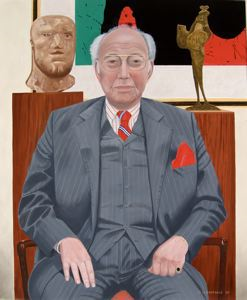 A philanthropic collector of modern and contemporary art, Benjamin D. Bernstein was the founder of Quaker Moving and Storage Company. As his business grew, Bernstein traveled extensively, especially in France, Holland and Great Britain, and he developed a deep love of art and a passion for collecting. From the start, he was attracted to the work of young artists, supporting them through art purchases and developing life-long friendships.

After amassing a large collection of art, he began donating works to local educational institutions. Over the years he gradually gave hundreds of paintings, prints, and sculptures to the La Salle University Art Museum. In addition, he set up the Benjamin D. Bernstein Acquisition Fund to enable the Art Museum to purchase further works. In gratitude for his generosity, the University gave him an honorary degree and the Art Museum named its 20th Century Gallery after him.

In this portrait, Bernstein sits in front of the print, Le Matador, by Joan MirÃ³, which he donated to the Art Museum in 2001.
Current Location: Art Museum : 20 C Hallway

Your current search criteria is: Keyword is "J" and [Objects]Object Type is "PAINTINGS".