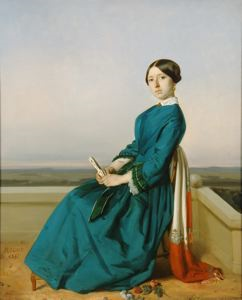 
Object Type: PAINTINGS
Creation Place: Europe, France
Medium and Support: Oil on canvas
Credit Line: Purchased with funds provided by the Art Angels
Accession Number: 06-P-526
In the 1850s, a womanâs ideal silhouette consisted of a small waist, drooping shoulders, and a voluminous skirt. The skirt would get bigger as time went on, and by the mid-decade, it was supported by up to seven petticoats underneath. As a result, silk became a popular material for dresses as it was light enough to hold over many petticoats without losing its shape. The wealthy lady in the painting, evidenced by her footstool and lace, likely had her cashmere shawl imported from India, as the country was known for the high quality and expensive feminine accessory. Alternatively, she could have gotten a cheaper imitation shawl ordered from France, England, and Scotland as well. Another mark of the womanâs wealth are the âengageantesââ removable white undersleeves that puff and close at the wristâ here trimmed with ornamental green ribbons.

Your current search criteria is: Keyword is "J" and [Objects]Object Type is "PAINTINGS".